The prestigious Obafemi Awolowo University regarded as Africa’s most beautiful campus is not for learning alone but also includes culture, and funny enough OAU students have their own culture, part of this culture are it’s popular slangs.

In no particular order these are the top 30 slangs common among Obafemi Awolowo Students.

Baba na u o: A sarcastic appraisal. Even when you are in big trouble they will still tell you say Baba na you oooo

Town gboro: Commercial buses ,commercial motor boys can be funny ,as if there is any difference between the two.

Aro: An annoying funny thing. Chai…. It is annoying to the person on the receiving end but so much fun to the person/people on the other end. Common trait possessed by virtually all OAU students…Awo boys can frustrate your life with it.

Igi iwe eso odo: Used for someone who read excessively but fails always. These people read as if there is no tomorrow but still fail always….na God fit explain that part ooo.

Mr moz: Guys who spend extra hours in female hostel. For guys that will be going for MOZ 101 or going there on any other mission as soon as it is few minutes to 10pm abeg disappear from that hostel. Staying there after 10pm is risky than driving after taking 10 cartons of whisky.

OAU choristers: OAU law students… I wonder how many white shirt and black trousers/skirt these students have. If you are coming in for law; welcome to OAU mass choir.

Maximum shishi: Common punishment for extreme offenders. Don’t try to steal in OAU because if you are caught you wont recover from the shame till you leave the school. Any thief caught will be beaten round the hostels with students taking photographs and recording the scenes. Its better to be broke abeg

Aye o po/aye o fe: There is no time to waste.

Won get mi: To be defeated academically ,financially or otherwise.

READ ALSO :-  Why many OAU students stayed back in school

Orombo: A term used to refer to guys in female hostels when the ladies are half naked.

Ife Igbeyin or Igbeyin OAU: Towards the end of the semester when students are already broke. People always watch the way they spend during this period.

Won sha mi(funny enough there won’t be oju ogbe): OAU students say this whenever a result comes out with red coloring.

E-portal: The portal was never a full A portal. For some, Its E-portal. Those who have recorded several E’s would always shout “E-portal ni o, most time as a response to ” Shanna”.

Bloody Fresher: You are a fresher the moment you know less of all what they talk about, the system, places, lecturers e.t.c you may not be one but not knowing about stuffs make you one.

Shaana, Ina, Gbina: When OAU peeps see you with book or they catch u reading u start hearing these.

All the best fun e: Just OAU students way of wishing the best for you.

Iwo da ntie: This is said to make u feel good about your result no matter how bad or good it is.

Iwe ogba: This is used for hailing someone that’s a bookworm.

Alaaro: One who frequently does Aro.

No Animal: Meal without no meat, fish or chicken.

Omo la toro, Iwe labi (we asked for a child, but we saw a book): Slang for an extremely brilliant student, who reads too much.

Item 7(Refreshment): once item 7 is guaranteed in your program then you’ve gotten OAU students attention.

Mo ti cast: When you get exposed.

OAU MANAGEMENT SEEKS TO BRING INDEFINTE CLOSURE OF CAMPUS TO AN END AS SENATE MEETING GETs SCHEDULED TO HOLD ON WEDNESDAY, OCT 20TH, 2021. 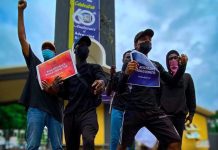