The authorities of the Obafemi Awolowo University, Ile-Ife, have restated their commitment to partner with the Osun State Command of the Federal Road Safety Commission (FRSC) on the University’s plan to have an accredited driving school and licensing office for the benefit of the entire University Community and its environs.

The Vice-Chancellor, Professor Eyitope Ogunbodede, made this affirmation in his welcome address to the new Sector Commander, Mr. Abayomi Emmanuel Asaniyan, who was in the University on a familiarization visit, having been just appointed to the state.

Professor Ogunbodede, who lamented that a lot fake driver’s licenses are in circulation, noted that the University is ready to have a licensing office on campus to cater for the need of the University Community, adding that an office space has already been set aside for its take-off as soon as FRSC, Osun State Command is ready to take it over and commence operation.

The Vice-Chancellor further stated that alongside the licensing office, the University desires an accredited driving school where proper and safe driving would be taught. According to him, the idea of the driving school, initially, is to benefit students of the Faculty of Agriculture to enable them learn how to drive tractors which are integral components of mechanized agro-business.

He expressed delight at the visit of the new Sector Commander to the University, stressing that his administration would support the FRSC in all of its activities towards making Nigerian roads free of mishaps.

Earlier, the Sector Commander, Mr. Abayomi Asaniyan had informed the Vice-Chancellor that he chose to follow the footprints of his predecessors who visited the University to introduce themselves to the University administration and seek support for the programmes of the Sector. The new Sector helms-man reiterated that the courtesy visit is like a home-coming for him: “I am back home. I am a friend, classmate and brother of the Vice-Chancellor. In fact, we are from the same place.”, he stated.

Mr Asaniyan said very soon, the driving school and licensing office requested by the University would take-off. He disclosed that establishing such is not a new thing to him as he set up a similar driving school at the Nigerian Defence Academy (NDA), Kaduna.

He commended the Vice-Chancellor for his style of administration which has endeared him to all stakeholders, particularly the Alumni of the University, noting that his transparency, honest and commitment to the ideals and vision of the founding-fathers of the University, distinguishes him.

While charging the Vice-Chancellor to remain unperturbed by the challenges associated with administering a University Community of OAU’s size and status, he called on all lovers of education to rally round the present University Administration so that together they can move the Institution forward. 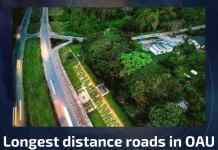 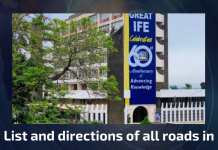