Bola Ahmed Tinubu, National Leader of the All Progressives Congress, APC, on Saturday, denied eloping out of the country, amid the End SARS protest.

Tinubu boasted that he still remained the Asiwaju and Jagaban of Lagos State, while dismissing insinuations that he alongside his family members left the country due to the ongoing protests.

He spoke while addressing Newsmen after he visited the Lagos State Governor, Babajide Sanwo-Olu.

According to Tinubu: “I still hold the title of the Asiwaju of Lagos and I’m still the Jagaban.

“Whatever they think, fake news is all over the place, they said Seyi my son was kidnapped and chased out in London but he is here.”

Assets in Lagos State linked to Tinubu were allegedly attacked during the protests that was hijacked by hoodlums. 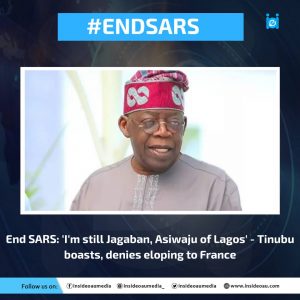