The Central Admission Processing System, CAPS was introduced to replace the manual process of admitting students and human errors associated with it. This post clearly explains in simple terms how this system works and the major benefits to candidates and other stakeholders.

3. The Admission officers will equally determine the percentage weight for each of the different admission criteria set on the system. e.g. UTME Score =50%, Post-UTME Score = 30%, etc. (note that the total percentage is 100%).

4. Once this is done, the system will automatically rank and list the candidates that are qualified for admission in the school based on the criteria the school has set in the system.

5. A proposed admission list would now be made available by the system, which the school’s admission officer is to download and send to all the principal officers of the school for approval. If the school rejects a candidate on the list, a reason has to be given.

6. With the approval of the list, the final list of candidates is re-uploaded on JAMB’s portal. JAMB will now notify the candidates on the list of their admission.

8. If you reject the admission, your profile and details become available in the market place for other institutions that can accept the qualification you have for the course you intend to study to offer you admission.

9. Once any school offers you admission and you accept the admission, you have been automatically admitted in the school. You no longer have the privilege to reject the admission and be put in the market place for other institutions to consider you for admission. You either take it OR wait for another year.

Major Benefits of CAPS To Candidates And Other Stake Holders

1. Prevents back door admission. This is in the sense that only candidates that select and accept admission from an institution will be admitted by the institution. The idea of getting admission in a school because you know a top official in the school is over because any name introduced in the system which is not originally on the system for that particular school will not be accepted by the system, neither will it be approved by JAMB for admission.

2. The system enables JAMB to verify the O’level results uploaded by candidates directly from the examination bodies like WAEC, NECO And (NABTEB).

3. The system will help in ensuring that schools maintain almost a uniform academic calendar.

4. The system will equally ensure that institutions comply with admission deadline.

5. The system will equally help make it easier for schools to fill their admission quota if there are admission spaces remaining after the school has admitted candidates that applied to it by going to the “Market Place” on the system to look for candidates that have met their requirements and have not gotten admission, thereby, offering such candidates admission consideration.

6. This system will increase the chances of candidates being offered admission through the “CAPS Market Place”

9. A Student’s status can be updated throughout their academic life in the Institution (Admission deferment, transfer, withdrawal, rustication, expulsion, and death). 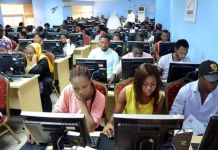 Faculties and Departments in OAU

JAMB CAPS: How to ACCEPT or REJECT Admission

How to Check Your JAMB UTME Result