Youth representatives on the judicial panel of inquiry in Lagos state, constituted to look into brutality and extrajudicial killings of citizens by the now-disbanded Special Anti-Robbery Squad (SARS) unit of the Nigeria Police Force (NPF) have reacted to rumors’ circulating social media that they are to receive N750k monthly sitting allowance.

The reps, Rinu Odulala and Temitope Majekodunmi were frontline protesters under the EndSARS movement in Lagos weeks ago.

A Twitter user known as Olashile Abayomi-Wealth has taken to the platform to alleged that the young representatives have been put on a N750k per month pay roll as members of the panel.

“So the judicial panelists are to receive 750k per month ?

However, Rinu and Tope released a statement via the Twitter account set up for the purpose of giving updates on the progress of the panel quickly debunked the claim by Olashile, clarifying that the government did not offer them remuneration for their work on the judicial panel.

“Fellow Nigerians, we would like to make clear that no money has been offered by the government as remuneration for our work as Lagos State Youth Representatives on the Judicial panel.”

“We also will not be collecting any money if or when it is presented. A group of individuals have come together to support us with legal, strategic and now financial aspects of our work to the tune of N50,000 a session.

“This is to cover costs incurred in the discharge of our duties and nothing more. A breakdown capturing who has contributed, what has been donated and so far dispensed will be shared shortly. Thank you for your continued support. – Rinu and Tope.” their statement read. 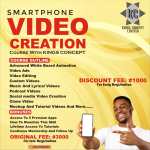 Sponsored Post Tomi Fresh - January 21, 2021 0
With 1k you will be learning.  How to create profesional marketing ads videos that grabs your audience attention and make them...

Trending Theophilus Adeniyi - October 20, 2020 0
It has been reported by eyewitnesses that security agents on Tuesday night allegedly opened fire on the peaceful protesters at the Lekki toll gate,...

Trending Theophilus Adeniyi - October 21, 2020 0
A group of angry Nigerian youth or hoodlums have besieged the residence of a former Lagos State governor, Bola Tinubu, with an...