Susan, one of the part one students who just resumed to the Prestigious Obafemi Awolowo University sighed. Rising to take flakes with milk, she fed her mind with thoughts about her mother. She recalled the last conversation she had with her when she called to check on her the previous day. The pedigree to her has always been a sooth. She missed everything about where she came from; the cooking, fetching of water from the community borehole with friends with the young men admiring them, and most especially, dancing! She had always thought if she was born to dance. Her graceful body made her dance a must-watch for each sight that caught hold of any of her dancing sprees. She wished to be home right away yet, she knew that was a fantasy, as her mother won’t agree. Besides, where’s the money? Raft of knocks came on the door, bringing her from her reverie, as she had leaned on the wardrobe, thinking. Being not as eager as she had been days ago, as she had been disappointed, expecting those knocks to be from her just-coming roommates. She made for the door, soliloquizing, “I hope it’s not any of those fellowship or tutorial people, as I haven’t made my decision on which to choose yet. These people had better resume asap( a word she just learned upon resumption) as I can’t be seeing to the door as tho that’s my business here.”Answering the door, she saw sophisticated babes in their literariness.
“Hello. I’m Sope, a final year student in the department of Chemistry. I happen to be one of the campus excos. These are my girl-fellows,” Sope said. “Hi!,” others chorused.
Susan, getting tensed about the reasons the school excos were asking about her said, “I’m Susan, a fresher, as you can see. What have I done?”.
Sope smiled as she replied, “Our being here means no harm, as you’ve done nothing. We are here to inform or perhaps remind you should you’ve heard about the freshers’ party, coming up this Thursday.”
“Oh, that! I heard it this morning when the announcement was made through the PAS,” She said feeling relaxed.
“Will you be around to grace the occasion, graceful body with perfect beauty,” Olamide who happened to be one of the fellows asked as she admired her from head to toe, observing her short, plumpy body with her well craved round face out of all the list of her body endowments.
Smiling, “I will think about it. Let’s see,” She answered.
“Please, let your seeing lead you to see what that party has in bundle. You might even win an award. Who knows? It could be ‘Miss Fresher,” Tolani, another of Sope’s pleaded humorously.
“Okay,” Susan said.
Sope and her fellows left, with a promise to return on Thursday, to remind her.
Getting back to her corner, she resumed her search for the flakes she planned to eat.

Sounds from clashes of pots and plates coupled with different aromas from her roommate’s cooking woke her. Becoming conscious of her environment out of sleep, “what’s today,” She thought. It was a Thursday, and registration continues. How did she wish she could get a whole day to herself? But there was another activity she hasn’t remember which Jummy, one of her roommates served as a reminder to remind her.
“Today’s Thursday. Will anyone here be going for the freshers’ night?” Jummy asked with her eyes gleamed to reveal much excitement. “I heard from my elder brother that it’s always fun,” She continued with a scream, shaking her boobs.
“Really? I might try going then, “Tofunmi, their co-roomie said, getting interested
“Great! Who else?” She questioned. “Beauty, follow us go this party na,” Jummy pleaded.
“Beauty, you be ‘follow-come’ charger?” Seyi, the room wag added humorously.
The ladies burst into laughter.
Susan who has become used to being called beauty by people since she appeared on campus responded, “okay ooo. But that’s if I happen to be free by then.”
“Free?” Jummy asked with mockery. “No, be that ‘confu fight’ you wan go after your registration exercise?” Babe, better come relax at this party?
“For the umpteenth time, it’s Karate, not confu,” Susan answered.
“Whatever!… You just must come for the party, “Jummy said with a note of finality.

Few minutes to 8 that night, the fresh students streamed into the most popular of the university theatres – Amphi. Who doesn’t know Amphi? There’s this popular axiom of – “omo Amphi omo OAU”. Amphi glittered inside-out with disco lights. Susan wasn’t left out, as Jummy won’t let her stay behind. And has she happened to be free as she had said, she followed, with Tofunmi, Damola, and Nike – her hall mates.
On getting inside, they were led to a place. To Susan, it was as tho the place has been prepared for them. She didn’t bother as she felt she could be safe with Jummy, who happened to be playing the most experienced among them. So, she relaxed, eating the refreshments.
Into the party, Susan was delighted she had come. The party has been hilarious, to her. She was grateful Jummy brought her. To her, Jummy was a friendly and loquacious person who was trying to bring her out of boredom. But unknown to her
“It’s time for the dance contest,” She heard.
It was the MC’s voice that woke her from her reverie.
“The party officials have done so much work in compiling the list of the dancers. So, listen attentively as you might be one of them,” the MC whom Susan later got to know as Caliper announced.
“….Ibitoye Susan,”Caliper caller as his eyes kept rolling on the paper in his hands, calling the list.
“What?! How did he know my name? There must be another Ibitoye Susan here,” Susan thought.
The called ones filed to the stage from different parts of the theatre on hearing their names. Someone was found missing amongst.
Caliper held the mic and called, “Ibitoye Susan, department of Psychology, reg number 78679402HG should please come up here!”
“What?!” Susan as well as her companions asked in unison. She rolled her eyes to one who seemed to be her saviour there – Jummy. Her eyes meeting Jummy’s, she gave her a wink, telling her to go for it.
Heads moved in their best-suit angles to view the lady delaying the show.
In her graceful body, she made for the stage with her bums moving as tho in accordance to a military call of “up down up down”. As she moved, whispers and shouts of “opoor, kopoke” were heard. Susan, untouched by the words wasn’t moved, for she has always been a delight.
Minutes into the contest, two hands grabbed Jummy almost simultaneously.But for the disco lights, she might have been able to fathom whom they were, cos unknown to her room and hall mates, she has spent close to 6 years on campus and is now one of the most popular girls on campus.The trio who were beside her didn’t notice what was happening, as they were engrossed in watching the scene before them.
“This way!” The guy holding her left arm ordered.
“No, that way!” The guy holding her right argued as he looked at the other so badly.
One eventually gave in to the other, as both dragged her to the part the theatre where darkness gloomed.
Speaking in hush tones, the guys asked simultaneously, as tho planned, “Jummy, why? I gave you what you asked!”
The first continued, “I gave you four rounds of sex”
The second uttered immediately, “I gave you six, Jummy. You fucked up! And I promise to revenge this”
All of a sudden, the lights went out with the whole place giving a shout, “ah…..”

Who are the guys? What’s Jummy’s motive? Was the light out from the PHCN? Find out in the next episode. 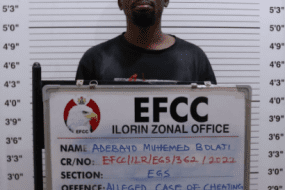 Mechanic who wants to be baller bags 12 Months Jail for Cyber crime . 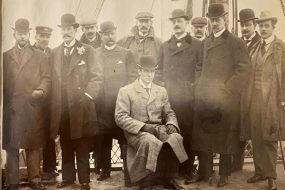 History: The Real Story behind the 1897 Benin Invasion by the British Force