Embarrassing moments comes at one point or the other during our lifetime. Most of which are unforgettable, some are funny, while others are pathetic. Nine people shared their most embarrassing moment so far:

Kuburat a 26years Old lady said: My most embarrassing moment was the day my ex-boyfriend chased me with his car in Oluyole at Ibadan. I and my ex-boyfriend broke up last year because I met someone who was better than him financially.I was just walking by the road side one Friday when I saw that a car was moving too close to me. I started running away from the road but the car still followed. I flung my slippers and ran faster but his car won’t stop. He later parked and came down of the car with his friend. They were laughing while I was breathing heavily. I sent him curses via SMS later that day before I blocked him again. 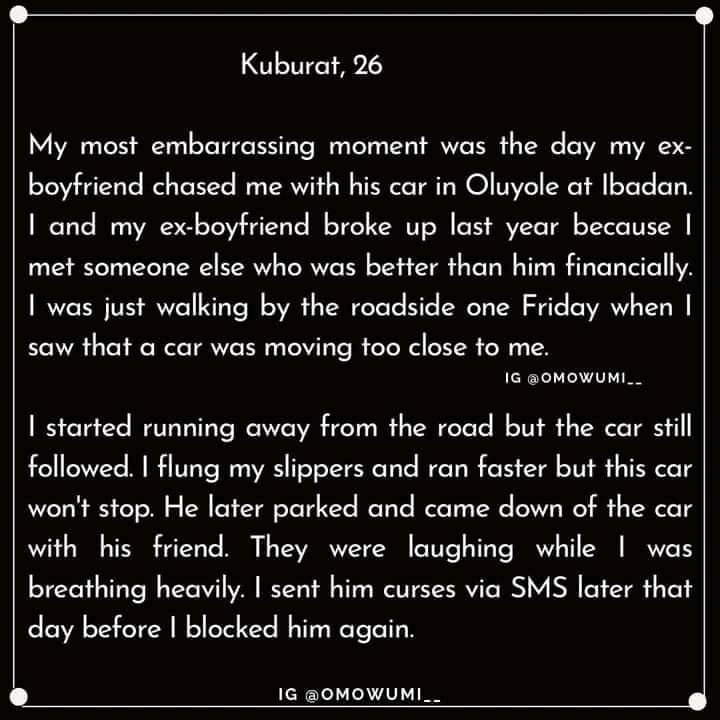 Abiola, a 32 year old said: I went to my friend’s wedding with my new girlfriend last year. I introduced her to my friends which was something I later regretted. The groom’s friend were called to dance with him and spray him money. On the dance floor, I saw my girlfriend picking the money we were spraying, infact she was so focused. I tried communicating with her with all kinds of body languages to stop embarrassing me. Sadly she kept jumping around as the money was flying and was sweating profusely. She came to me and dump some of the money she picked inside my pocket because her bag was full which got me extremely pissed. My other friends noticed and I had no choice but to leave the dance floor. That day was the last day I talked to her 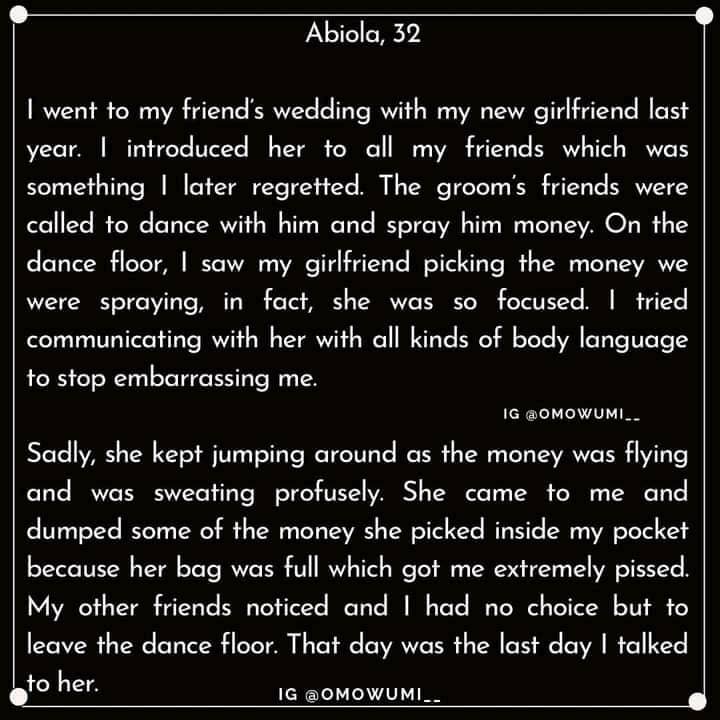 Ridwan, a 26 year old said I had just finished buying food at a restaurant and a small boy approached me to beg for money. I gave him the 100 naira that I had left with me. I saw a mad man approaching me after the boy left, he was also stretching his hand to ask for money. He was moving closer so I walked faster too. He got really close and I had to run. That’s how the marathon started between me and a mad man on a Sunday morning at Ikotun. Someone shouted give him the food nah and I remembered saying a silent curse for whoever it was because I was too hungry to let go. People were laughing and some were even recording me. A Celeb like me that had about 25k followers on IG then. I ended up leaving the food for him and he backed out. My precious bread and beans (ewa agoyin to be precise). He will run m*d all over again. 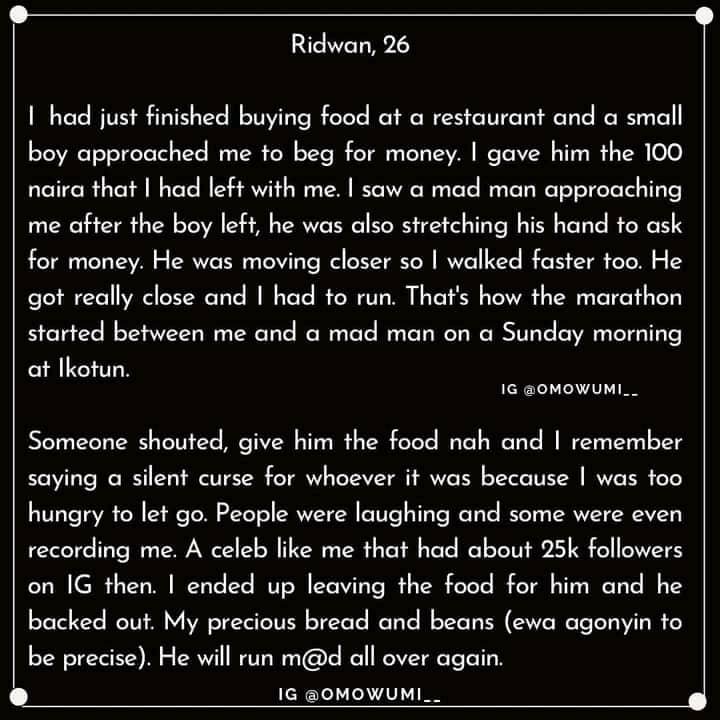 Richard, a 35 years old guy said: I had dated my girlfriend for five years plus. And I wanted to take things to another level with her. One day I took her to 5-star restaurant to ask for her hand in marriage. I had already planned with the staff at the restaurant so that every attention would be on us and the photographer would be able to capture the beautiful moment. My girlfriend (now ex) didn’t only reject the ring but also threw it away. I was embarrassed but I had to crawl to pick it up because I spent thousands of dollars on it. Most of the people at the restaurant bursted into laughter. Even though they sell my favorite food at that restaurant, I haven’t been there in 2years. 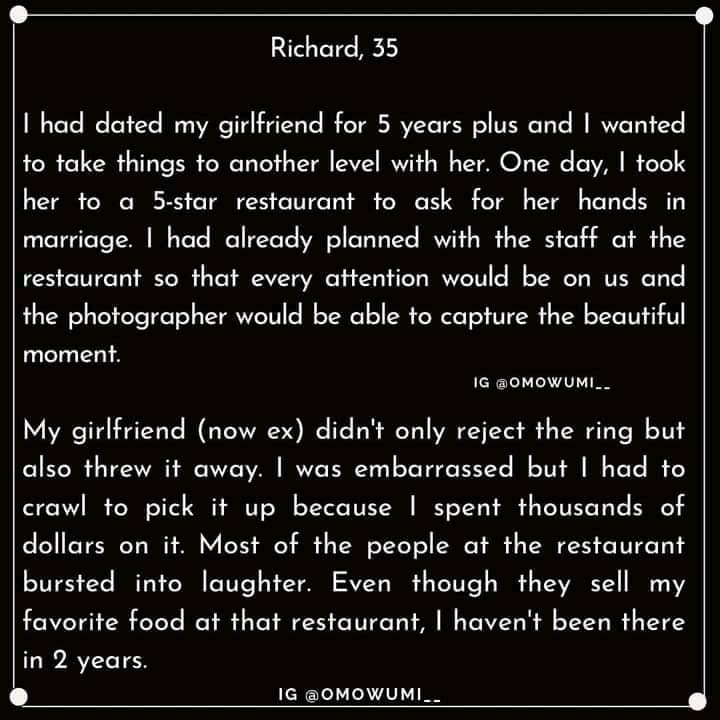 Felix, a 25 year old said early last year, I travelled to Ogbomoso to sort out some things in my school. I had severe stomach pain before I left school but I didn’t bother to do anything about it because I thought I could endure it and sort myself out once I get to Lagos that same day.I got hungry so I bought Oyo bread and akara to eat.I finished eating and my stomach started making this weird noise. I let out a silent fart with a very strong odour that distorted the atmosphere of the bus,the passenger started complaining but I wasn’t bothered since I expected them to stop once the odour fades in a few seconds. After like 20mins,the odour was still strong and people still kept complaining. I later realised that I had sh!t in my pant when I farted. The driver stopped and asked everyone to come down to find what was smelling. Mothers with babies were forced to checked if their babies pooed. I quickly used my handkerchief to wipe my wet sit when I stood up but it didn’t work because flies were around it. Everyone knew I was the one already. I humbled myself and apologized to everyone before I entered the bush to sh!t properly and cleaned myself.

READ ALSO :-  12 things Aspirants should be warned about before they pick OAU 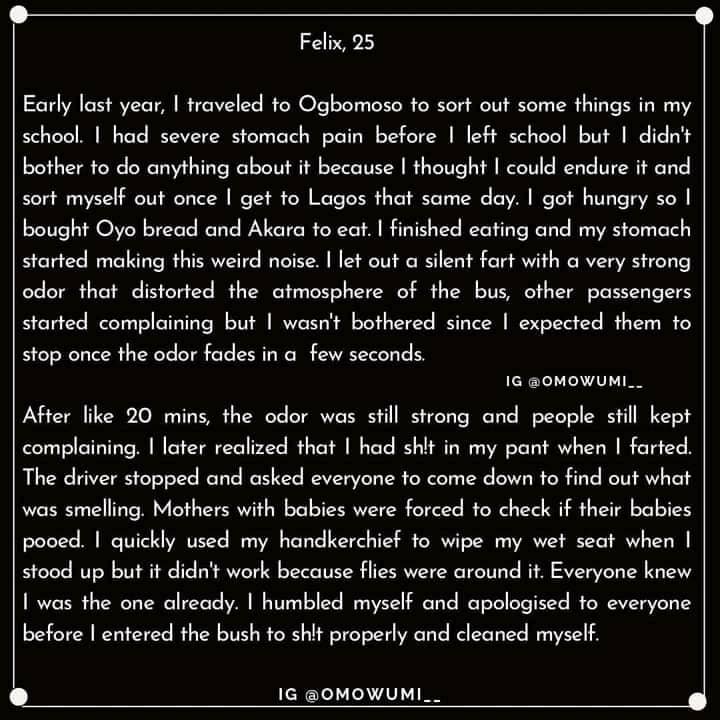 Jessica, a 24 year old said: I was crushing on this guy I saw on Instagram. I followed him with the hope that he would follow back. Whenever he posts a new picture, I’d like and comment so that he would notice me. I decided to stop doing that because it didn’t work. One of my friends advised me to keep following and un-following him so that he would eventually follow back. That’s how I took her advice o. After the 6th time, I couldn’t find his page anymore. I used my business page to check and I realised that he has blocked me. I checked his story and he wrote “I will block your a$$ if you keep following and un following me,don’t bring your madn€ss to my page”. I was so ashamed, I wouldn’t even be crushing on him in the first place if I knew his mouth is not good. How ridiculous, a whole spec like me! 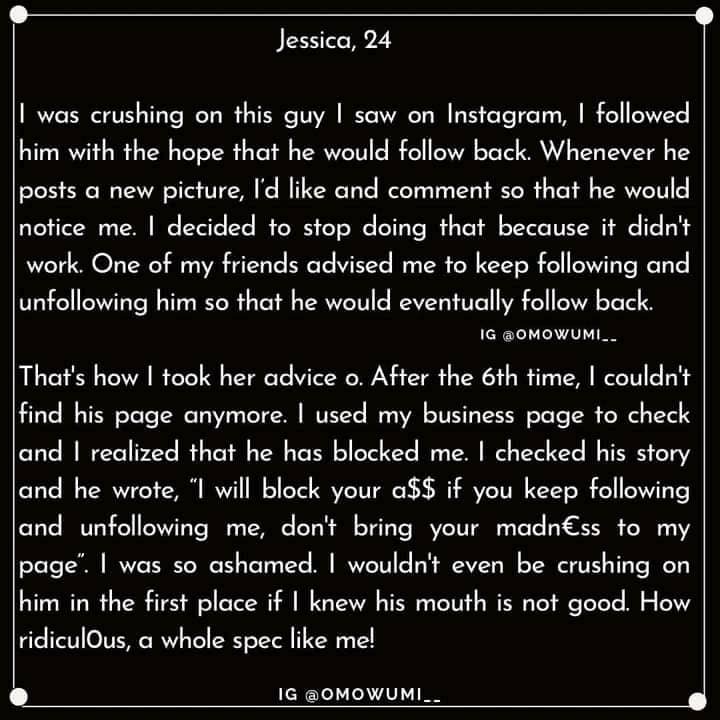 Martin, a 28year old said: My friend introduced me to an organization that gives people loan. I took out some money which I needed for something urgently. Due to some issues at my place of work, I suspended making payment for three weeks.That’s was how the loan app stated sending sham€ messages to all my contacts, including all my exes that I’ve been trying to impress all my life. Since I close earlier on Fridays, I planned to go to their office to settle things amicably.I met them at my office entrance with his pictures,some pictures even had debtor written on my face with a red ink. E weak me! I did everything to pay them up a week after. Taking loan is something I will never repeat till I die, I don learn. 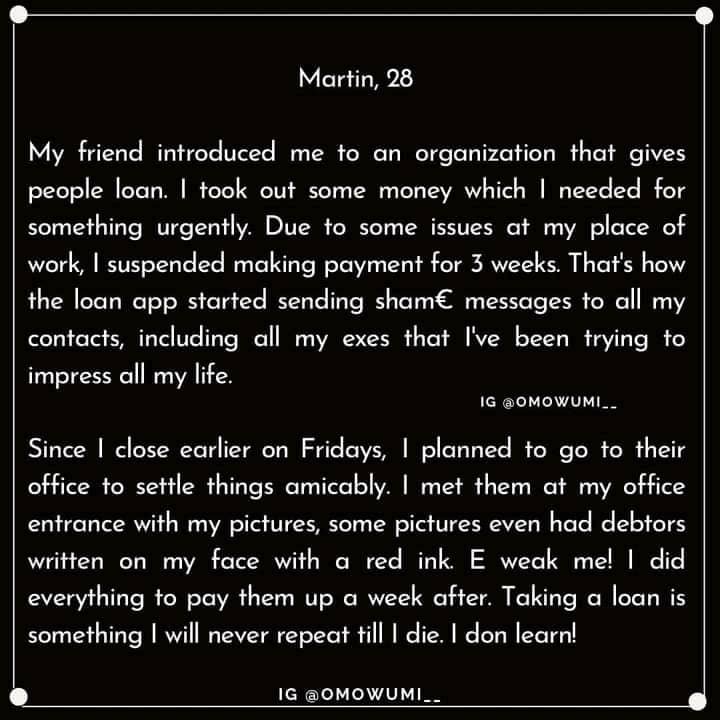 Chris, a 26year old said: It was the day my girlfriend’s ex beat the hell out of me. I went out on a date with my girlfriend, we were eating when I noticed her mood changed. I wondered why until her ex showed up at our table. I haven’t even let him say a word before I landed a dirty [email protected] on his face for coming to ruin the mood for us. The next thing was that I couldn’t feel my legs touching the ground. He carried me and threw me on the floor gbam.I gathered all my energy and went for him again. He punched my face and I became teary,my nose was pumping blood and one of my eyes shut close already. My girlfriend started screaming at a spot without even attempting to rescue me. The last thing I could remember that day was that he carried me up again and I woke up on a hospital bed. I left the Stoopid girl for him.

READ ALSO :-  HOW TO ACQUIRE WORK EXPERIENCE AS A STUDENT. 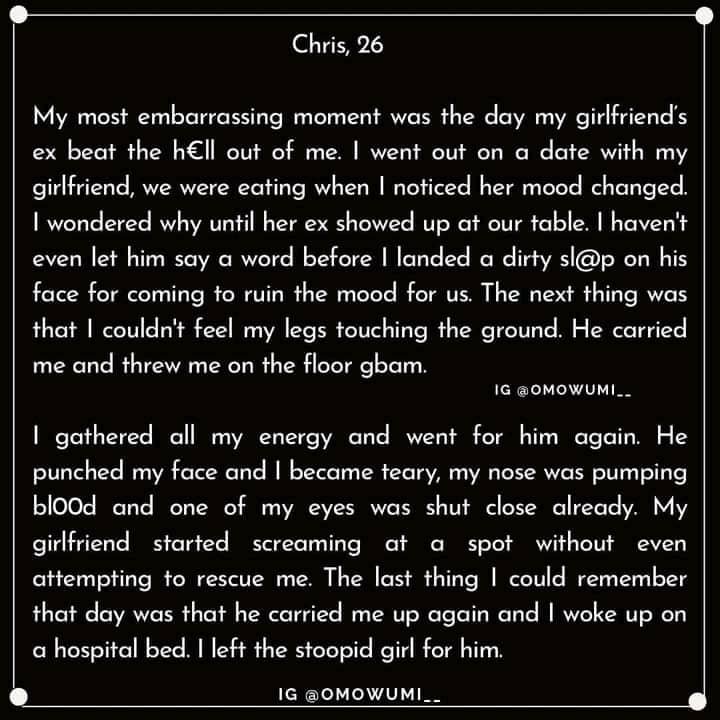 Olaitan, a 25 year old said: I used to find it very funny whenever people talk about trying to flush the toilet in their man’s place and it won’t go until it happened to me one day. This happened the first time I ever visited my boyfriend at his apartment in Ajah. I had been holding the sh!t since I finished eating the food he served me around noon. At 5pm,I couldn’t hold it so I decided to use the toilet. Only for me to flush and the toilet refused to flush. The size of my sh!t was actually the problem. The most annoying thing was that it takes so long before the flush tank get filled up after using it once and there was no bucket to fetch. After about the 7th time of flushing,he came around to check if everything was okay because I was already spending forever there. I took the tissue paper in the toilet and rolled it up till it got thick, I picked up my sh!t that refused to flush and dropped it inside the WC flush tank with the tissue and left.He later found out and confronted me a week later, I was so ashamed. We are still dating though. 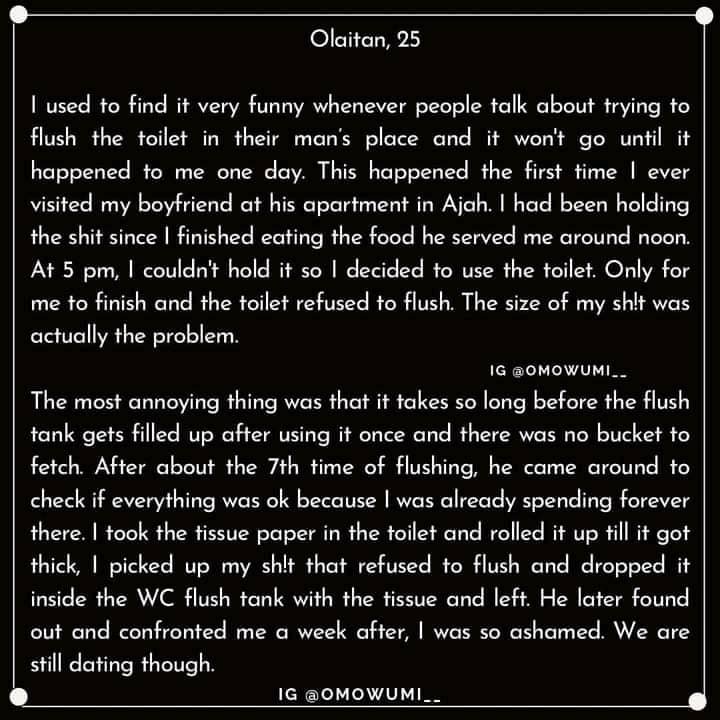 Omoooo,that was one hell of an embarrassing moment.You wants to share yours too. You can share through IOI anonymous or say it in the comment section if you are not shy.

One reply on “9 Nigerians Share Their Most Embarrassing Moment” 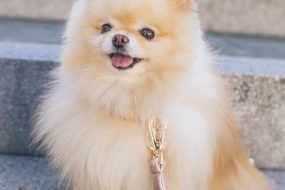 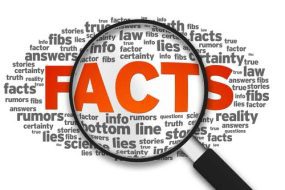 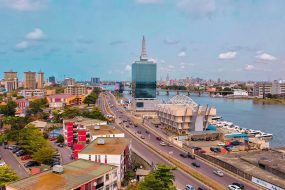