Who Has A Greater Chance Of Becoming The Next President? – Tinubu VS Obi 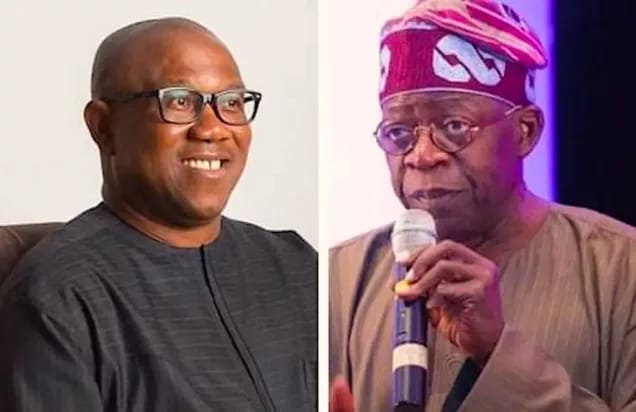 We are approaching the 2023 Presidential election; the youths are active and the elderly ones have their favourite presidential aspirant already. On media, some are boastful about their preferred candidate while some set of Nigerians have chosen to avoid debates that will spur hateful disputes.

Now that everyone is eager about the elections and the deadline for PVC registration is close, we are left with the big question, “Who is the next President?”.

Three great politicians are vying for the presidential post and as we have it, 2 candidates are head to head with their fans vehemently supporting them online. The two candidates are Peter Obi and Tinubu. The fans of these duo also combat on media. While some engage in healthy arguments and lay down their premise and conclusion on why their favourite aspirant deserves to be president, some cause violence online.

We have the BATified and the OBIdients. The OBIdients feel their candidate is the new messiah, the one who will bring back peace and joy to the bashed nation. BATified people feel their candidate deserves it due to his power and hard work in building one of the largest cities in Nigeria. Who does this crown fit? Obi or Jagaban? Another big question!!

However, we can compare this duo and see who has greater chances. Omo, if you are active on Twitter, you will know that the fans are not sleeping but awake to support their preferred candidate. The Soro Soke generation is speaking up, aiming for a new Nigeria.

So, I’ve piled up 5 reasons each why both OBIdients and BATIfied people feel their candidate deserves to be president. Perhaps, at the end of this article, you’ll conclude if your aspirant is the best or if you should settle for another presidential aspirant.

1. Peter Obi’s fans are determined to wipe out APC and PDP for next year.

OBIdients feel APC has done more harm than good. This is a result of Buhari’s reign which has only increased terrorism, insecurity, incessant strike/educational breakdown and inflation. For OBIdients, it is time to wipe out APC and PDP for the next 8 years and try out a new party. It is not about a new party alone but because they have seen Peter Obi as the new messiah.

3. Peter Obi is their messiah

“Peter Obi is the new messiah,” this is what you will hear his fans say. Nigerians have suffered within the 8 years Buhari has used in power. Is it about the high prices of foodstuffs in the market or about the innocent lives we have lost due to insecurity? Is it about the rate at which the dollar increases every day like Ijebu garri? Haba! Everything about this man’s reign irks OBIdients that they just want APC out of power for a while.

Those supporting Peter Obi believe he can put an end to the insecurity in Nigeria. They have analyzed his success when he was a governor in Anambra. They feel he had done a good job there and he can build Nigeria as well. They are bent on making sure Jagaban do not get to rule and every day, you will see them fighting those who support him online.

4. His fans believe his age factor and physical fitness makes him fit for the post.

Peter Obi’s fans love him because they feel he is calm as a dove and he has a cool personality. To them, this indicates that he would rule well with the love of Nigeria at his heart. His personality has struck a lot of Nigerians and they are vouching for him. Besides this, Obi is very fit and active. Peter Obi is not as old as his counterpart who lies about his age. When Tinubu’s in-law revealed Jagaban’s age as 86, that would certainly have heightened the joy of OBIdients.

One thing they drag Tinubu’s fans online for is the way Tinubu walks and moves in videos and pictures online. They would always cite that this was a new Buhari, stating that he would even be worse than Buhari if he emerge as the president. For OBIdients, their candidate is fit enough, eloquent, sensible, and intelligent. To them, he is a very good option!

5. Peter Obi is educated and no crime has been attributed to him.

Peter Obi being educated and literate with no crimes being attributed to him, makes his fans think he has greater chances of excelling. Unlike the news that has spread like wildfire about Tinubu being a drug baron and having no educational certificate, Peter Obi is clean. This is one reason his fans love him so much. What if he has secrets too but it has not been exposed yet? The OBIdients don’t care. They love this man and will forever root for him.

Now, over to those who claim to be BATIfied.

1. All Progressive Congress (APC) is powerful

BATifieds believe Labour Party(LP) does not have a greater chance of being the next party in power. You will hear them say politics don’t work that way. This is because APC and PDP are powerful. This gives Tinubu a better chance of excelling. What if this turns out to be erroneous and Peter Obi wins? Can LP turn out to be the next party in power despite the other parties being more powerful? Don’t try to argue with anyone who is a BATified online, they will finish you with their premises and conclusion.

These people root for Tinubu like their lives depend on it. They are not only ardent and strong, they are intelligent as well. They will always bring up several reasons Jagaban deserves to be president despite being booed at by those supporting Obi. Those supporting Tinubu look past his flaws and focus on his strengths.

2. Tinubu has so many fans even elderly ones are supporting him. He might win.

I have realized most elderly people are vouching for Tinubu. Have you wondered why? This is because they know him better than they know Peter Obi. Some OBIdients might think this is an effect of tribalism and religion. However, it is because they believe so much in this man who they have known for a long. They believe he has served Nigeria. In some governorship elections recently conducted, most elderly people came out to vote than the youths did. If OBIdients online do not come out to vote after mobilizing for their candidate, they might lose to Tinubu.

3. People believe Tinubu developed Lagos and can cause a change in Nigeria.

One claim BATified always raise to support their candidate is that Tinubu made Lagos become what it is today. Lagos is large, developed and always busy. It is one of the finest places in Nigeria too although we have the island and mainland. They feel Tinubu’s past success makes him fit for the presidential post. However, OBIdients attack them and claim this is not a real reason to vote him in. They also feel he is not healthy enough to rule but the BATified won’t give in. They feel this man deserves it and that’s final. Oun lo kan! He’s the next!

With confidence, you can aspire to perspire? Is that not what they say? One reason BATifieds feel Tinubu has a greater chance is that he is confident. They love his personality and they feel with such confidence that he has, he is a better choice. His popular saying “Emi lo kan” indicates his high level of confidence. A confident and brave person will make a good leader. If Tinubu is confident enough and with his plenty fans, he can excel. But will OBIdients allow this?

The 2023 presidential election will be full of drama and energy. Everyone is now politically inclined, and active. It is not enough to support your favourite candidate and cause violence online, get your PVC. If you want your vote to count and your favourite aspirant to emerge as the winner, it is best to get your PVC.

Success cannot be achieved without readiness and action, you know? And when it’s time to vote, do not sell your votes. If you sell vote for 10,000 naira, you will end up suffering in your trenches when the bad man emerges the president? Is that clear? So, are you BATified or OBIdient? Do you think your favourite candidate has a better chance? Can Atiku surpass these duo? Let’s know your views. Drop them in the comment section!