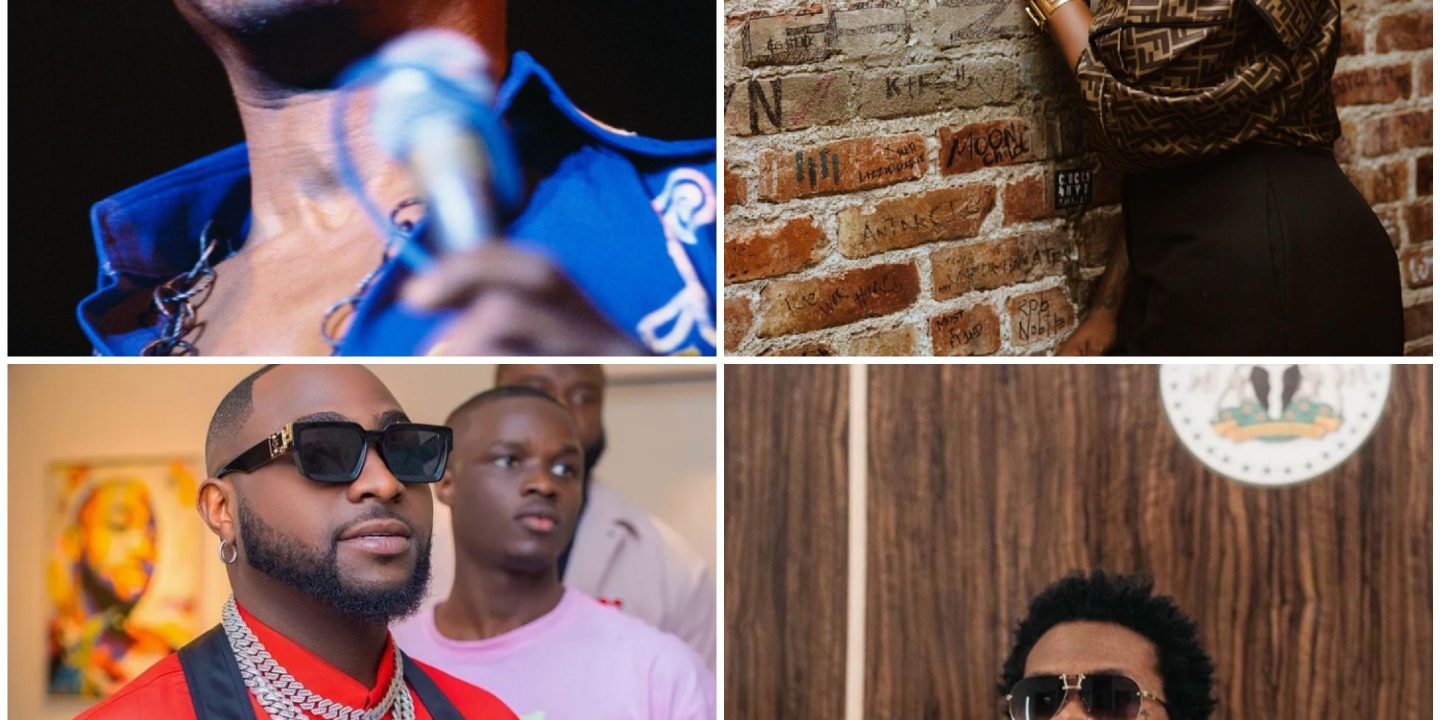 Nigeria today happens to be the best rocking the music industry in Africa, it’s the leading country producing the best-talented artists and musicians on the continent. Many artistes in the country were recognized for their hit jams and power in music, throughout the evolution of music decades.

However, some musicians have either fully impacted the growth of the Nigerian music industry. Those that have retained their legacy for others aspiring to be a part of the big industry, which among them have most of their symphony flowing along with the new age and style of music including those that brought the new era.

We Ranked The Greatest Nigerian Musicians Of All Time

Let me present to you those in this category in a count-down:

Wande coal is one of the music artistes in Nigeria that started music while they were young. He was signed to Don Jazzy’s Mo’ Hits Records in 2006. He featured on D’banj’s Rundown/Funk you up album on singles such as “Loke”, “Tonosibe” and “why me”.

His first single from the CV album, “Ololufe”, has been portrayed as one of the most incredible love songs ever composed by a Nigerian. Wande later released his debut album Mushin To Mo’Hits which was vastly accepted across Nigeria, and overseas; the UK and the USA.

The songwriter and singer went on break and made a comeback with another album, Wanted. He released “Turkey nla” in 2017 and another single “Again” in 2020. While we’re still looking out for more of his songs, his previous songs would make a great throwback for a Thursday playlist.

Popularly known as ‘Baddo’ is a Nigerian rapper and singer, he’s one of the most notable artistes on the continent. His music is recorded mostly in his mother tongue, Yoruba, and a mix of the official language, English.

Baddo was already signed to Coded Tunez record label earlier, managed by ID Cabassa before he released his debut studio album Raspodi in 2011. The album’s lead single “Omo To Shan” was air played and charted on many radio stations across the nation. It paved the way to collaborate with many other artistes, the likes of Wizkid, Reminisce, 9ice, and others.

Olamide left coded tunez to start his record label, named after another follow-up album  YBNL, his imprint name Yahoo Boy No Laptop aka YBNL nation. The album consists of the most aired of his songs; “First Of All”, “Voice Of The Street”, “Stupid Love” and others. The charted single “Durosoke” was released in his third studio album, Baddest Guy Ever Liveth. His achievements ranged from his being the first Nigerian to sign an endorsement deal with Cîroc to his multiple awards and the young artistes he had helped to rise in the music industry.

The R&B female artiste signed into Mavin Records in 2012 where she made an appearance on one of the compiled singles in the album of Solar Plexus.

Her debut studio album Once Upon a Time was released, in 2013 and was supported by seven singles: “Kele Kele Love”, “Love Me”, “Without My Heart”, “Ife Wa Gbona”, “Folarin”, “Olorun Mi” and “Eminado” and was nominated for Best Album of the Year at the 2014 NEAs. Her album also earned another nomination at The Headies for Best R&B/Pop Album, 2014.

The Koroba singer won the Best African Act at the 2018 MTV Europe Music Awards, making her the first woman to win the category. Her song “49-99” posed a historical significance to describe the blend of Afrobeats, R&B, and pop music with colorful imagery and symbolism. She has evolved to be one of the greatest.

In 1996, he adopted the stage name “2Face”. He mentioned the reason as “trying to demarcate my personal life from my business life” he said. He’s also popularly known as 2Baba, his smash hit “African Queen” orchestrated the popularity of pop music in the 2000s. It was a new wave that blew Nigerian music across the continent.

He was the first winner of the MTV EMA Best African Act category, in 2005, and he is one of the most awarded Nigerian musicians in history. In 2010, 2Baba released an “International Edition” of the same album with the title The Unstoppable International Edition making him the first Nigerian artiste to have an appropriately priced international album.

The Okoye twins, Peter and Paul, bringing out insight from their music idol Michael Jackson, began to break dancing, and created the group called “Smooth Criminals” in 1997.

They released hip-hop songs; “Roll it”, “Do me”, “Personally” and more collaborations with other artistes before they disbanded and separated in 2016. They recently returned as P Square again this year and many are joyous they are. They made a comeback with “Jaiye” and “find somebody”, as they are excited to witness the reunion of the great duo.

David aka OBO, Omo Baba Olowo, named after his 2011 studio album where he worked with many artistes to get it produced. The song also featured a couple of artistes like 2face and Ice prince, it received a nomination at The Headies in 2013 and also at the NEAs for Best Album of the year that same year.

The Chris Brown-assisted track “Blow My Mind” was released, in 2019. Produced by Shizzi and was originally aspired to be released as the album’s lead single. The video amassed one million views in 11 hours, surpassing Wizkid’s “Fever” and “Come Closer” to evolve the Nigerian music video to achieve this accomplishment rapidly. It also billed the Nigerian music video to attain abundant views within the first 24 hours of its release.

Read also: The Top 7 Richest People In The Adeleke Family (2022)

Davido returned with the single, “FEM” after taking a three-month break away from social media. Davido’s single “FEM” Video strike 1.8 Million YouTube views in trivial than 24 hours, smashing his record for the earliest Nigerian music video to hit 1 million views on YouTube, a record previously held by his song Blow My Mind. That did earn him “one of the greatest musicians of all time”.

Known now as Starboy, started his music career at an early age. The Nigerian songwriter and singer signed a record deal with Banky W’s Empire Mates Entertainment, E.M.E, in 2009. He released the hit love song that gave him rising fame, “Holla At Your Boy” the lead single from his debut studio album Superstar. After his contract with EME expired, he left the record label after he released his second studio album, Ayo.

He didn’t stop there as he earned international commendations after his collaborations with Drake on the hit jam single “One dance”. It reached number on the US Billboard hot 100 and topped the charts in 14 other countries making it the first Nigerian artiste to appear in the Guinness World Records.

His collaboration with Beyoncé on the single “Brown Skin Girl” reached number one on the World Digital Song Sales Chart, and gave him a Grammy award. His song “Essence” released from the album, Made In Lagos, where he featured the rising artiste, Tems, became the first Nigerian song to chart on Billboard Hot 100 and reached the top 10 when it was remixed with Justin Bieber. Wizkid was the most streamed Nigerian artiste of all time on Spotify, no doubt he is one of the greatest musicians of all time.

The giant of Africa himself found himself fame after releasing a lead single “Like to Party” from the debut studio album, L.I.F.E in 2013. In 2019, he earned the  Best International Act at the BET Awards, he was declared the Apple Music Up Next artiste.

His fourth studio album, African Giant, released in July 2019 won Album of the Year at the All Africa Music Awards that year and was also nominated for Best World Music Album at the 62nd Annual Grammy Awards. The Odogwu singer released his fifth studio album, Twice as Tall, 2020, That was nominated for the same category at the 63rd Annual Grammy Awards, making him the first Nigerian artiste to win back-to-back nominations at the Grammys.

Burna wouldn’t have seen it coming as he had become internationally embedded in the music world, referring to his late recognition at the start of his music career. Burna boy has collaborated with many music artistes worldwide, and he has kept the pace of best representing the face of Nigeria in the music world.

The popular jújú singer, multi-instrumentalist, and songwriter regarded as one of the pioneers of Afropop musicians to gain international notability, King sunny ade.

In 1967, he formed the musical band that earned him national fame. In 1982 he further access International fame with the albums ‘juju music’ and ‘synchro system’ 1983 which gave him a Grammy nomination.

Fela Anikulapo Kuti, he’s also known as the abamí eda, was recognized as the pioneer of Afrobeat while he blends African western music with American funk and jazz.

Fela is a multi-instrumentalist, band leader, and political activist. His music has certain captivation and is almost challenging and channeled to politicians of the time then. He was an inspiration for many musicians across the nation, even overseas. Songs like, “Eko Ile”, “Monkey banana”, “Beast Of No Nation”, “Everything Scatter”, “No Agreement” and many more of his best made their way to his listeners after his rise in the 1970s at that time he became an outspoken critic against the military government though that earned him 20 months in jail.

Despite all odds, he continued to release his music albums and tour other countries to display his musical approach to combating underlying issues in his country. He’s got all the inspiration to offer upcoming artistes.

Right from the count down, you’ve read how we ranked our greatest Nigerian musician of all and every time!

Let us know your favorite artiste so far in the comment section.

2 replies on “Top 10 Greatest Nigerian Musicians Of All Time”