Top 10 Male Celebrities Death We Cannot Get Over 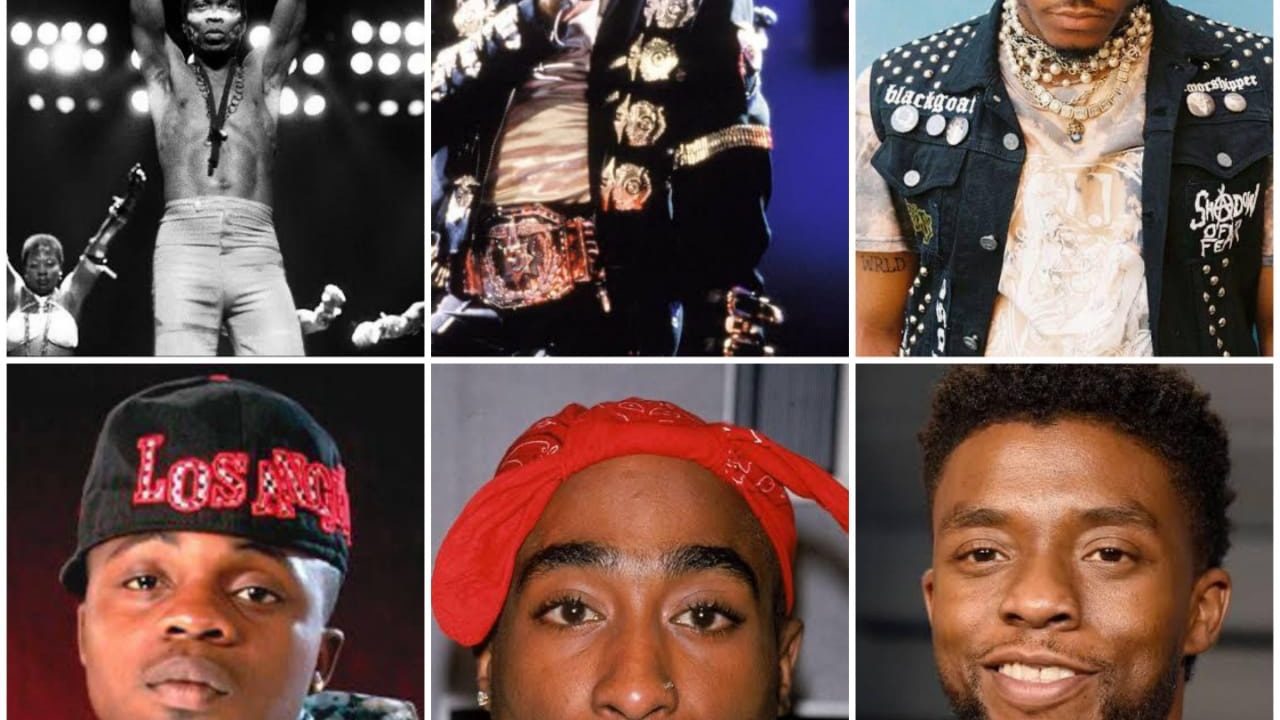 Death is inevitable and we all are aware that life is a journey and we are tourists. There is a time to be born and a time to die. Death is a painful transit that takes those we love to a far place. We are always struck with grief and misery when we lose our favorite ones to death. There are certain celebrities whose death we can never get over due to their fame, talent, and creativeness. When they died, the populace was shocked and left in awe.

The reality is sometimes, death is unavoidable and each day we live, we are closer to the day we will die. This article covers male celebrities whose death shook the world. Although some of the male celebrities might have died for long, they are constantly remembered.

Below is the list of unforgettable male celebrities whom we lost to death.

Olarenwaju Abdul-Ganiu Wasiu, popularly known as Sound Sultan was a replica of Fela Kuti. He was a Nigerian rapper, singer, songwriter, actor, comedian, and recording artist. His music also speaks against societal ills, poverty, corruption, and bad governance in Nigeria. Some of his popular songs are Motherland, Kokose, Natural Something, etc. Sound Sultan’s family revealed that he died of Angioimmunoblastic T-cell Lymphoma which is a rare form of non-Hodgkin lymphoma, a group of related malignancies (cancers) that affect the lymphatic system. He died on 11 July, 2021.

Juice Wrld is another celebrity whose death we can never get over. Jarad Anthony Higgins was an American rapper, singer, and songwriter. Before his death, he released popular songs such as Lucid Dreams and Righteous, etc. While traveling to Chicago on a flight from L.A, he suffered a seizure at the Midway International Airport in 2019. Juice Wrld was taken to a hospital but he did not survive the seizure. He was pronounced dead some hours later. A medical examiner later confirmed that the seizure was caused by an overdose of opioids while an autopsy revealed that it was an overdose of oxycodone and codeine.

Robert Nesta Marley OM, popularly known as Bob Marley, was a Jamaican singer, musician, and songwriter. He was popularly known for his melodious songs such as “No Woman, “No Cry; One Love; Is This Love amongst others. Bob Marley was a world ambassador of reggae music. Bob died of melanoma in 1981 when he was only 36 years old. The melanoma skin cancer started at his toe and he battled with it for four years.

Known as the King of Pop, Michael Jackson was an American singer, songwriter, and dancer. Michael Jackson was one of the remarkable and popular cultural figures of the 20th century. Some of his popular songs were Billie Jean, They don’t care about us, Wanna Be Startin’ Something, Heal The World, and Beat it amongst others. The pop singer died at the age of 50 at his home in Los Angeles, California, after he suffered cardiac arrest caused by a fatal combination of a deadly cocktail of sedatives and an anesthetic, propofol, given to him by his personal physician, Conrad Murray. Besides singing, everyone loved Michael Jackson because of his peculiar dance steps and moves.

Popular Nigerian singer, Da Grin is one unforgettable celebrity. Oladapo Olaitan Olaonipekun, also known as Da Grin, was a Nigerian rapper from Ogun, Nigeria. He was a rising star. Sometimes, many Nigerians wonder how the music industry would be if Da Grin was alive. The rapper’s rapping style incorporated English, Yoruba and Pidgin English. Also, a film of his life titled Ghetto Dreamz was released in April 2011. Da Grin died in a ghastly car accident when his car ran into a stationary truck around 3am at Mushin in Lagos back in April 2010. He died later at LUTH from the injuries he sustained in the accident.

Till now, people find it so difficult to believe that 2Pac has died. Tupac Amaru Shakur, also known as 2Pac and Makaveli, was an American rapper. 2Pac is considered one of the most influential rappers of all time. He released many known albums before his death such as Tupac Live, All Eyez on me, The Don Illuminati, 2pacalypse now etc. 2Pac died on September 1996 when an unknown gunman in a white Cadillac shot him four times in the chest at a stoplight in Las Vegas. 2Pac Shakur was struck by four 40 caliber rounds from a Glock, he got two bullets in the chest, one in the arm, and one in the thigh. Tupac later died from his wounds six days later.

Great Femi Anikulapo Kuti, popularly known as Abami Eda was Nigeria’s best musician. Fela was a multi-instrumentalist, bandleader, composer, political activist, and Pan-Africanist. He was the pioneer of Afrobeat, an African music genre combining West African music with American funk and jazz. We lost Great Kuti to heart failure caused by AIDS. Fela was a great legend whose music passed great messages especially in advocating social justice. He released popular songs like Water No Get Enemy, Shakara, Gentleman, Lady etc before his death. During his time, Fela was repeatedly arrested and beaten for writing lyrics that questioned the Nigerian government. However, Abami Eda did not relent but continued to use his music to pass messages across. Two of his children, Femi and Yeni Kuti opened Afrika Shrine to honor him after his death. The third shrine is larger than Fela’s first shrine.

Paul William Walker was an American actor. Paul Walkerwas known for his role as Brian O’Conner in the Fast & Furious franchise. He also starred in the road thriller, Joy Ride and successful heist, film Takers. He died in 2013 after sustaining injuries from a single-vehicle collision while speeding. He and his friend, Rodas were on the way to his charity reach out when their car crashed into a concrete lamp post and two trees, catching fire. Rodas died of multiple trauma while Walker died from the combined effects of trauma and burns. Their bodies were burned beyond recognition. Paul’s daughter and father had filed lawsuits against Porsche which resulted in settlements as the popular actor was driving Porsche before the accident. He had not finished Furious 7 at the time of his death. His death did shook the world and he will always be unforgettable.

Chadwick Aaron Bossman was an American actor who acted for two decades. During his lifetime, he received so many awards. Chadwick was known for the popular movie, Black Panther where he played the iconic role of T’Challa, leader of Wakanda. Chadwick was diagnosed with stage III colon cancer in 2016, and battled with it these last 4 years as it progressed to stage IV.” The 43-year-old man later died from colocteral cancer, also known as colon cancer in 2021. The cast of Black Panther is set to release Part 2 in honor of the iconic superhero, Chadwick Bossman.

The list, of unforgettable celebrities whom we lost to death, is long and unending. However, the above celebrities’ death did shook the world and till now, we just cannot get over it. We hope that their beautiful souls Rest In Peace as we cannot forget their impacts. If you have anything to say concerning this article, please drop your views in the comment section.