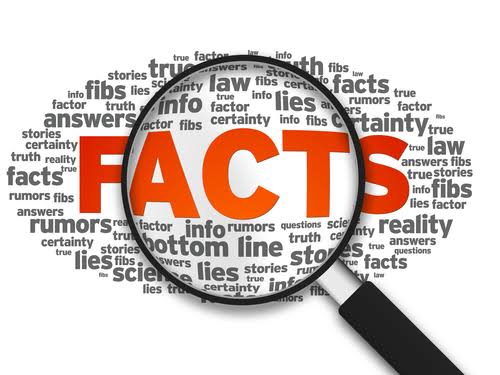 People often believe in facts that they can observe and experience and the older they get, the more rigid their mentality of what should be and can be gets as they feel they have experienced enough in life to recognize facts but easy facts are not all there is to the world.

The popular rapper, Dave, said in one of his songs, “the truth is madder than fiction” and although that is the rapper’s artistic version of the not so popular saying, not many can say they still don’t believe it after accepting some weird and almost inconceivable weird facts to be real. Below are 10 weird facts that’ll make you question all that you might’ve ever known.

1. You can get yourself a flying bicycle

No, this is not a Wakandan invention and yes, neither iron man nor batman helped in creating this tech device that seems so before it’s time. John Foden and Yannick Read invented what they call the XploreAir Paravelo which consists of a folding bicycle and a trailer that contains a biofuel-powered fan motor. The craft can reach a speed of about 25 mph and an altitude of 4000 feet. The inventors were however unable to mass produce this futuristic invention ad they weren’t able to reach their funding target.

2. Dolphins sleep with one eye open

Before you scream “fishes can’t wink,” know that Dolphins are mamals. These Marine mamals must always be on alert because of predators and therefore developed a life hack of sorts to stay vigilant. They maintain a partial consciousness even when most of their brain is asleep. We can say the Dolphins are the definition of “Always guiding.”

Surprise! If you’ve ever called someone who sweat a lot a pig, you’ve told a lie as sweating like a pig would mean not sweating at all. Pigs do not have sweat glands and it is so right from when they’re born which is also the reason why they’re always in search of cool and sometimes muddy areas to cool off at.

4. Spiderwebs were once used as bandages in the distant past

Doctors of the ancient Rome and Greece used spider webs as bandages for their patients as they believed it had natural anti-fungal properties which could help keep their patients from infection.

Read Also : Church of adonitology; where they worship big butt

The human body contains 206 bones of which 52 are present in both feet. Yes, those pretty little feet of yours. Those bones and joints help the body to perform very important functions such as supporting our weight, absorbing and releasing energy, walking, running, and jumping.

6. Cotton candy was invented by a dentist

Dentist William Morrison and confectioner John C. Wharton invented a machine-spun cotton candy in 1897 and introduced it at the 1904’s World Fair as “Fairy floss” before another dentist in the name of Josef Lascaux reinvented it in 1922 and renamed it to cotton candy.

7. Children of identical twins are genetically siblings instead of cousins

Read Also: THE YANOMAMI TRIBE – Where the living eats the dead.

8. It would only take an hour to drive from earth to space

Not much of a fact but a fun theory. If you started driving towards space at a speed of 60mph from earth, it’ll take you only 60 minutes to get to space.

9. A cloud can weigh almost a million pounds

Only clouds in fairy tales are light and feel like cotton candy. In real life, a cloud can weigh more than a million pounds and still float because the air underneath it is heavier. How insane is that?

10. A rainbow can appear at night

Rainbows occur when light pass through atmospheric vapour so people are used to seeing this on sunny days but did you know? Rainbows can also be caused when enough light from the moon passes through a misty place. This eye pleasing scenery is called a moonbow.

Are these facts strange enough or you’ve heard of stranger facts? Share your knowledge with us in the comment section.

Incase you missed it: Yanomami tribe: The tribe yet to experience civilization